A hoard of 12 silver coins has been found by Stephen Sproule whilst he was metal detecting on land at Fincham, near Downham Market, in October 2011. It has been declared treasure, which means their finder can keep them, at a coroner’s inquest today.

Coroner Jacqueline Lake said the small silver coins were known as Sceattas and represented the first type of penny, which were minted from 675AD until the middle of the 8th Century.

“They were scattered over a wide area but would appear to represent a hoard or part of a hoard, rather than stray losses over time” she said.

“These coins are in good condition and had not been in circulation long when deposited.” 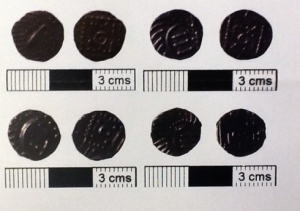