Birmingham and Stoke-on-Trent in discussions over world tour. A selection of pieces from the Staffordshire Hoard may go on show in museums worldwide as part of an international tour. Birmingham City Council and Stoke-on-Trent City Council, the joint owners of the Anglo Saxon treasure trove, say that they are in discussions about sending the seventh-century artefacts abroad.
In October, the UK’s largest permanent display of the hoard opens at Birmingham Museum & Art Gallery with the launch of a new gallery housing hundreds of pieces.
The Staffordshire Hoard is the largest hoard of Anglo-Saxon gold and silver metalwork yet found. Discovered in a field near the village of Hammerwich, near Lichfield, in Staffordshire, England, on 5 July 2009 By metal detecting enthusiast, Terry Herbert.  It consists of over 3,500 items that majority of which are martial in character and contains no objects specific to female uses.
Read more 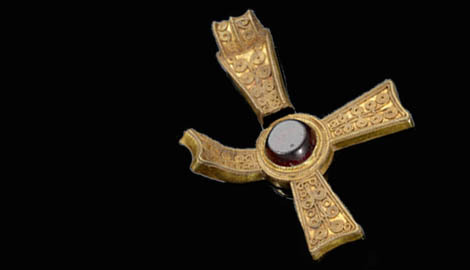