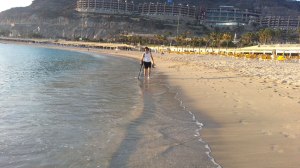 A bit of time has passed since my land appraisal of the new Garrett ATX metal detector was printed. This is due to me running weekly metal detecting digs and working full time.  I knew I had a fortnight’s holiday coming up on a Spanish island.  I have a very forgiving metal detecting widow who has had to suffer my metal detecting addiction for over 20 years

I landed in Spain and headed to the hotel and within an two hours I was on the beach, yes with the Garrett ATX detector ! I had downloaded the tide times and it was low tide.  I managed only a couple of hours and found mostly pull tabs and coins.  I had set it up the same as I would on land and it operated perfectly.  This beach is man made with imported sand with underlying rocks but the ATX coped with no problems at all with these or electro magnetic interference in this or any area I tried on my holiday. 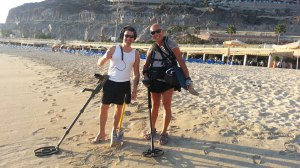 I met a local guy who was detecting and ignorantly I could not understand a word he said to me but he looked excited about seeing me using the Garrett.My aim of this holiday like most was to relax and do some Scuba diving and mostly to detect in the surf to chest height at any chance I could.  We took a boat trip to my next beach but this was more of a reccy and sightseeing day but I returned the following day with the ATX.  The beach is a small bay and busy but off I went leaving my wife on the beach.  I had to increase the Discrimination to 4 to stabilize the detector which I expected but this allowed me to up the sensitivity to 8. The detector was super stable even though I was surrounded by shops and bars all offering Wifi etc but the ATX purred away with the big stock coil on.

The ATX sounds are like the Infinium which I loved in the surf and felt at ease with the detector instantly.  The beach was a natural one this time with a nice layer of stones a scoop

down,  I started off with tab after tab but you have to dig these as they sound just like a ring would High/Low and most coins where Low/High.  I was half an hour into detecting when I got a very quiet signal which I honestly thought was another tab but after two or three scoops I looked amongst the stones and seen the wedding band shape…Yes my first gold ring with the ATX and in Spain!!  I worked away for another hour but mostly coins and tabs,  I stopped for some water and a sandwich then back in with a bit more optimism and after an hour I had most of the same but I got a good loud High/Low signal and you guessed it another gold wedding band with a white gold interior band.  I was over the moon with the detector and my days detecting but the scoop that I was using was not living up to the job due to the hard layer of stones and rocks below the sand which was making my digging very hard going as the sand was falling out the front of the scoop.

The ATX is not the lightest thing you can put in a suitcase but it I managed to fit this a sand scoop and all my clothes in the suitcase 15 Kilo and my 5 Kilo hand luggage. Once in Spain I visited a hardware store and bought a long brush handle for 3 euro and fitted it with ease.

Before you go detecting you must remember to use vasaline on the battery and headphone seals to keep any water out.  I would also recommend rinsing the detector with fresh water at the beaches to get the salt water off it as this rots anything.  I did notice that the cam locks where stiff on holiday so ensure you give them an extra long rinse.  I also used toilet tissues to clean the old Vaseline from the headphone and battery sections and make sure there is no sand in these parts.

Over my two weeks I managed only two gold rings tons of pull tabs and £50 odd euro but I do put a lot of blame on my scoop which stopped me from getting to the places I wanted on the beach and to dig the depth I wanted to dig but I WILL return with a mighty scoop that wil not let me down.

If you are looking for a discriminating and ground balancing pulse induction detector that can perform on land as good as anything on the market but will also do what other top of the range Pulses can’t do,  operate with excellent sensitivity to thin gold rings totally submerged in water for hours on end and not be affected by magnetic stones or outside EMF then the Garrett ATX is the only pulse detector currently on the market that can do both of these things.  A good accessory would be the small Mono coil which would be my preference for the water as it was a killer on the Infinium LS.  The ATX will perform as good on UK beaches as it does on Spanish ones.

I hope you found my reports helpful and not over technical.  I pride myself on putting on paper exactly how I found the detector to perform.  If you are ever up in Scotland look me up at http://www.toddys-digs.co.uk or find me on Facebook.