METAL detecting enthusiast Ronald Lees unearthed the find of a lifetime in a field at Peover Superior. The 62-year-old initially found dozens of Roman coins, which became a hoard of almost 7,800 after archaeologists helped reveal the full extent of the amazing discovery. The bronze coins were produced in the third century, and the majority were found in a pot a few inches under the ground.

Mr Lees, from Altrincham, discovered the coins when he and friend Rick Parker made their fifth trawl of a field on a cold, wet winter’s day in January 2015. At an inquest into the find at Macclesfield Town Hall on Wednesday, Alan Moore, deputy coroner for Cheshire, declared the coin hoard to be treasure. Museums can express an interest in a find if it’s treasure, and if a museum wants the treasure the Treasure Valuation Committee will decide how much it is worth and how much will go to anyone entitled to a share of the find. 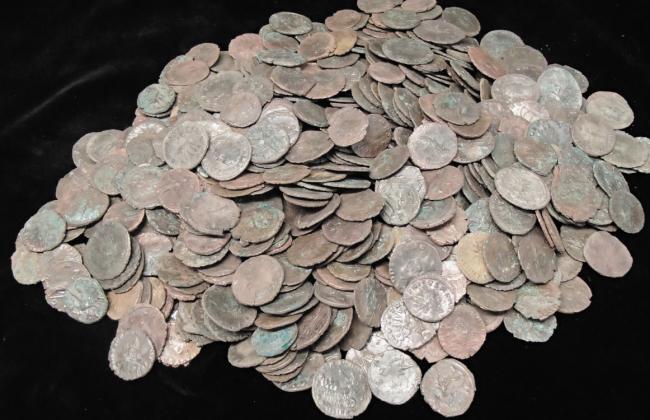 Mr Moore told Mr Lees at the inquest that It is an absolutely amazing find. Mr Moore read out a report by Richard Abdy from the British Museum. In his report Mr Abdy said the coins date from AD 251 to 274, and are similar to the many Romano-British coin hoards buried in the aftermath of the breakaway Gallic Empire. The empire was established in AD 260, he said, had held dominion over Britain and was reconquered by the legitimate ‘central’ Empire under Aurelian in AD 274. The coins include ones from the earliest years of Aurelian’s reign, and the latest are those of Tetricus I, AD 271-4 and his young son Tetricus II, the last of the Gallic Emperors. The greatest number, 1,902, are from the reign of Tetricus I, with 745 from his son’s reign. There are 1,670 coins from the reign of Victorinus, AD 269-71, 899 from Gallienus’ reign, AD 260-8, 599 from the reign of Claudius II, AD 268-70, and 354 from Posthumus’ reign, AD 260-9.

Speaking after the inquest, Mr Lees said he took up metal detecting again three years ago after being interested in it in his 20s.